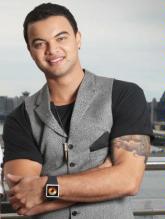 Recently, in a dingy bar with the slightly unusual name of Drom on New York's Lower East Side, Guy Sebastian found himself playing to an audience of eight. And he loved it.

"I played a residency in that bar for a month, and no one had any idea who I was, but it grew from a few people to a few hundred people. The whole experience of doing that has been so satisfying," says Guy. "It's been really good for my soul." And a huge serving of soul is exactly what informs Guy Sebastian's fifth studio album Like It Like That.

There is no doubt that Like It Like That will stamp Guy Sebastian as a true soul singer with a unique modern sound. "I wrote the music on this album based on how I feel when I listen to the Otis Reddings and the Wilson Picketts of the world.

I'll put that music on and it always just lifts me and makes me feel great." With Like It Like That, Guy just wants whoever hears it to just enjoy.and you won't have a choice. The sounds of Like It Like That will make you feel something very strong indeed. "Music is so powerful. It's powerful enough on a personal level, without me trying to change the world," says Guy. "I just want to change someone's 10 minutes on the way to work."

One listen of Like It Like That, and there's no absolutely no question that Guy Sebastian will do just that. Turn it up and dance.