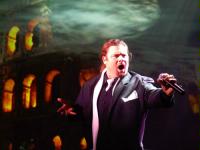 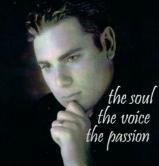 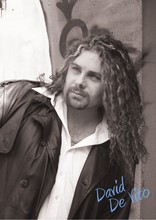 The unique and creative musical style can be attributed to the many genres of music which has influenced David De Vtio over the years. Born a son of a Neapolitan Opera Singer, David’s first taste of music was passionate to say the least, including wonderful renditions of “O Sole Mio”, “Nessun Dorma” and many more At age 4, David persisted to have a suit like his fathers so he could perform on stage by his father’s side, and he continues to perform with his Father today some thirty years later.

Childhood saw many years studying Classical Piano filling the young mind with the artistic processes of Bach, Mozart and Paganini. It was at this young age that examiners had discovered his rare talent of obtaining “Perfect Pitch” and reciting enormous sonatas without music. It was also at this time that his creative flare for composition was spawned with the birth of the song “Don’t Leave without Goodbye”, which went on to win two prizes at music festivals in his home town David has been reported to having one of the most powerful voices ever recorded with a thunderous 152 decibels of power .The command over his voice is astonishing and evident in his rendition of “Nessun Dorma” as you will experience a vulnerability and sweet Pianissimo ( very quiet )in his delivery and a crescendo climatic goose bump finale`

Involved with fronting many bands and entertaining, David De Vito has gone back to his roots of opera and has enjoyed a successful stage career, touring in Australia and the US twice. Not satisfied with just music, David De Vito enjoyed a season featuring on the television show “Moving Properties” and wrote the soundtrack to the feature film “The Turner Affair” The late ninety’s spawned the release of David De Vito’s first album “Felice” which showcased original compositions and a couple of the opera greats. “Felice” has a wondrous palate of musical depth, rich with passion and thunderous power. All the above mentioned influences ring through beautifully in each of the songs as you are taken on a musical journey and a porthole peep into this artist’s soul.