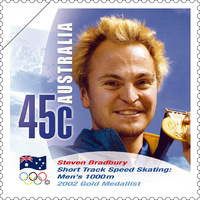 Gliding over the finish line at the 2002 Salt Lake City Winter Olympic Games saw Steven Bradbury’s name etched into the history books. Skating in the 1000m final and in fifth place, the unthinkable happened. Race favourite Apolo Anton Ohno from the United States and the other 3 skaters ahead of Steven, fell in a tangle of skates and arms and legs on the ice. Leaving the path clear for Steven, he glided across the finish line in first place and became the first EVER Australian to win a Winter Olympic Gold Medal !!! For the speed skater with the eye-catching spiky bleached blonde hair and charismatic grin, it was a fitting end to his athletic career. In an interview after winning the gold, he said: “Obviously I wasn’t the fastest skater. I don’t think I’ll take the medal as the minute and a half of the race I actually won. I’ll take it as the last 12 years of hard slog I put in.”

Steven Bradbury is 1 of the world’s most recognisable & colourful Olympic champions. Steven has an impressive career as an Olympic athlete that has been driven by determination, sacrifice and most importantly a will to succeed. With the same passion as he has shown on the ice, Steven has continued his success as a motivational speaker / MC / Keynote Speaker / Staff Motivator / Event Personality / After dinner speaker to corporate clients, sporting clubs, schools and charity organisations. Steven’s achievements in speed skating include: • Australia & Southern Hemisphere’s 1ST EVER Winter Olympic Gold medalist • Australia’s 1ST Winter Olympic medalist (1994 Bronze Medal 5000 metre relay) • Four time Olympian athlete (1992, 1994, 1998 & 2002) • 3 time world championship medalist (Gold-1991, Bronze-1993, Silver 1994)

Steven is a popular keynote speaker and MC. His warm friendly nature, down to earth manner and use of humour is sure to help ‘break the ice’. The Bradbury story is one of the true Aussie battler who overcomes all kinds of adversity to achieve the ultimate goal. His presentation entitled ‘Last Man Standing’ includes: • Audience participation & competition (winner gets signed copy of steve’s book) • You will actually touch Steven’s Olympic Gold Medal • Great stories and an inspirational poem • His father’s influence (instilling a work ethic and lessons learned) • Business success through his speed skate making company • A 3 part DVD inc.: 1, intro 2, blood spilt on the ice and 3, reliving that Olympic final through Steven’s eyes. • When your moment to shine presents itself, will you be in position, and prepared to be the next “to do a Bradbury”. • As well as being entertained and inspired your audience will be left with a lasting impression that much of the prize is in the journey and that success takes PASSION, PERSISTENCE and TEAMWORK.

Some people have described Steven’s victory as lucky. Winning Olympic gold took a lot more than just luck. The same as in BUSINESS, STRATEGY and PLANNING were KEY INGREDIENTS in that success. Four Olympic campaigns and 12 years of hard training including an Olympic Bronze in 1994, 111 stitches in his leg and in the year 2000 a broken neck are testimony to that hard work and persistence. The story leading up to this achievement is what makes his presentation memorable and unique. Steven’s story touches a chord with people from all walks of life and is a prime example to all that if you “stick it out”, you too can be the last man standing. Steven Bradbury portrays the following characteristics: • Leader • Excellence • Success • Dynamic • Unique • Leading edge • Well recognised • Attention-grabbing • Inspiration • Self-motivation His presentation messages also include: • Sport strategies, business success • Values and principles – sustaining a culture of success • Universal lessons of sport – striving towards excellence • Adversity fuels the pursuit • Believing in the preparation • Defining success and valuing the process Steven’s presentation can be tailored to the theme, budget, audience and objective of any event.

WHAT THE CLIENTS SAY: …

“Steven Bradbury’s attendance at our 41st annual conference was indeed the highlight of the three days. Steve captivated our delegates and left them with a clear message that if you worked hard and kept trying, anything is possible.” THIS WAS STEVEN’S 1ST EVER KEYNOTE SPEECH IN 2002 !! Bob Scullin - RETRAVISION AUSTRALIA P/L

"Steven was amazing - the best keynote speaker I have ever seen ( and I have seen a few!) I read his book on the weekend and couldn't put it down. What an amazing story - I am so glad he told it." Donna Rogers – National Marketing Manager – AMP Capital Shopping Centres

"Steven was the MC at our Quest Newspapers annual YoungStar Awards, the event was attended by around 600 people including the Deputy Premier and Minister for sport. Steven's performance was refreshing, humorous and definitely not your traditional stand up presenter. His approach was professional and while working from our script, managed to personalize it with timely ad-libs to suit the moment. Quest run around 20 major award events each year around Brisbane and never before has our MC been in demand to sign autographs at the end of the night, Steven really aided in the success of the evening. If you are looking for Different, Quirky and Memorable, Steven could well be your man. Kerry Brunton Marketing Manager Quest Community Newspapers

“Steve was genuinely entertaining. He provided an extremely amusing, yet relevant piece in his summation that left the audience both on the edge of their seat and in throes of laughter. He fully deserved the thunderous applause ” IGA AUSTRALIA

"From the tremendously positive feedback we’ve had, Steven’s message about pushing through obstacles to achieve your goals, really struck a chord with everyone. Steven has a real gift in being able to help people see that they too can achieve success and they are greatly encouraged and inspired as a result. I was delighted that not only did Steven have a good message, but he was able to deliver it in a very relatable way – his self-effacing attitude about his gold medal, combined with his Aussie sense of humour was a big hit!" Mike Taylor - Functions Manager - MCKENNA DIAMONDS TEAM