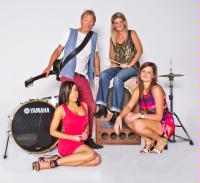 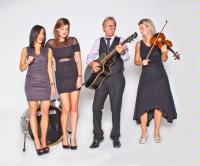 Captain Wow are a highly entertaining, energy packed party show band. Nick Waters on guitar and vocals is joined by Shonay Raynham and Courtney Hayes both on vocals while drummer/percussionist extraordinaire Jodie Davis sets the beat for the band.

Not many bands can boast such a diverse party set list of sing-along classics and dance tunes. You'll hear anyone from Anastasia, Daft Punk, Jack Johnson plus 80’s Retro, 70’s Disco, 60’s flower powered pop, Reggae and Country Rock classics. Captain Wow promise to bring party songs with dynamic three part harmonies, and way more energy and fun on stage than any band has the right to have. They love what they do and you will too!

They are known from Cairns to Tasmania, and having played most of the major clubs and Casino’s, are recognised as one of the most versatile party acts in the country. Their sense of fun comes to life with their live show but never compromises the delivery of any song they choose to cover. Nick and the band have supported American Disco legends The Village People as well as Aussie greats such as Jimmy Barnes, Mental As Anything, John Farnham, Diesel, Mark Seymour from Hunters and Collectors, Richard Clapton. Captain Wow definitely is a whole lot more than your average band.