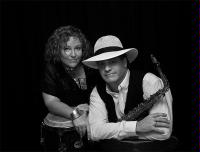 Amazon Blue are a fresh new and very experienced musical group, having four successful asian contracts under their belts which allowed their music to reach an international audience. After the completion of the first six-month contract at the Tokyo Hilton Japan, Amazon Blue were invited for another 6 months in tokyo, 6 months in nagoya, japan and back to tokyo. They have also completed ten successful contracts with Voyages Resorts eg Brampton Island Resort, Heron Island Resort and Spa. Amazon Blue were also contracted to perform on Daydream Island Resort for Christmas 2004, New year 2004, Valentines day 2005 and Australia Day 2005.

Now based back on the sunshine coast, they are creating quite a stir with their fresh repertoire of a contemporary jazz, groove based style. It seems there is a large number of people over 25 that want a change in the music they listen to and they are loving the ambience surrounding amazon blue. Imagine sitting back on a sunny afternoon, overlooking the water, enjoying a fine wine and listening to the smooth sounds of Amazon blue. Taking the risk of being different has been an incredible adventure and has most definitely paid off in in customer and Management Appreciation in a time where people are desperate for a change in music.