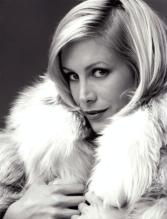 Polished and popular actor, presenter, MC and spokesperson known for her versatility and professional approach. Simone is available to add shine, style and flair to your corporate event, fashion function and television, film or radio segments.

Stunning Gold-Coaster, Simone Bennett-Smith, is a skilled actress, presenter and MC with over 17 years international industry experience. She boasts copious credits to her name including advertising campaigns (Telstra, Zyrtec, Nissan and American Express to name a few), television and film roles, and most recently as the ?face? of Suncorp Bank ?Bright Banking? campaign and host of channel 7?s Queensland?s Best Living series.

Simone developed a special love of dance as a young child, and moved from her home on the Mornington Peninsula (Victoria, Australia) to Brighton (in Melbourne, Australia) at the tender age of 15 to pursue this individual talent. She studied at the National Theatre Ballet School and completed high school via correspondence, forgoing a laid-back childhood in favour of hard work in order to pursue her dreams of performing. “When you are genuinely passionate about something you just do it, you make concessions. During this time I literally just slept, ate, danced and studied.” By the time Simone reached 17-years however, the leggy 175cm dancer realised, “I was pretty tall. I was given the option to go to America to dance (classical ballet) but was advised that at that time there were too few male dancers tall enough to partner me”.

It was at these cross-roads that Simone decided to pass on this opportunity, and rather, pursue a developing passion for musical theatre. She began studying acting and stage more seriously, scoring local television roles, advertising campaigns and stage work (including a production of Too Hot To Handle (1994) as well as My Fair Lady and Aida (1992) with the Victorian State Opera) while she studied. Her first big local break came when she auditioned for the Kevin Jacobson production of A Chorus Line in 1993, directed by an original cast member, Bayork Lee. Simone won the coveted lead role of Judy Turner and commenced a 14-month national tour with the show throughout 1994/95. Simone admits that this was somewhat a “baptism by fire” because by the end of the contract the young entertainer felt she had burned out.

It was at this time that she decided to embark on another adventure. Overseas beckoned, and with a European passport no problem, Simone very soon found herself living, studying and working in London. “That?s where the fun began. Being a dancer, actor and singer I had a genuine trade over there because the entertainment industry is so much bigger”. Simone trained at the esteemed Actor?s Centre in London and also took classes at Pineapple Dance Studios (Covent Gardens). She gradually built a name for herself and people in the know recognised her potential and paid work grew from there. “One of my first jobs was dancing for Simply Red at the British Music Awards. Then I just started working every single day of the year touring Europe with fashion companies including Adidas, Champion and Caterpillar Footwear.

I was fortunate enough to dance in live shows and video clips too, with Robbie Williams, East 17, Cher, Bryan Adams, Everything But The Girl and Neneh Cherry. I was also featured in live MTV Music shows and produced ?vox pops? and ?VJ? segments for Thank God It?s Saturday and Smash Hits (1997). Another memorable achievement was performing for Prince Charles in an ensemble cast at the annual Prince?s Trust event at the Royal Albert Hall in London”. Simone says a highlight of her UK adventure was scoring the starring role in the music video for The Scorpions To Be No. 1 (1999). The legendary German metal band took a slight turn with their music that year to incorporate a pop/techno sound into the release, and coupled this hot new sound with a sexy, sassy video that spoofed the Monica Lewinski affair.

Simone played a vivacious Monica in the clip, which is still a popular download on ?YouTube?. Simone spent around 6 years in the UK, utilising all her dancing, modelling, hosting and acting skills to win roles on and off the stage, presenting corporate videos and working for many European trade shows as a model and presenter for prestigious names like Dolce & Gabbana. Eventually though she started to become disillusioned with the industry abroad and homesick for her native country and decided it was time to ?come home?.

On returning to Australia, fate stepped in and Simone met her future husband, Adam, and for a short time resided in Sydney. Then she fell pregnant with her now 6-year-old daughter, Charlie. After a short time in Sydney, Simone and her family decided to make the move to Queensland, where they still reside today. Simone jokes that this was the first time in her entire life that she had taken time off, so the 9-months was essentially a welcome break for the hardworking performer. She continued to reflect during her pregnancy, and enrolled in further local performance schools in order to pursue acting and presenting from her new home-base on the Gold Coast. Simone took some classes with renowned casting director Tom McSweeney to pass the time, and consequently rekindled her underlying love for the stage. Simone waited out the lull which crept up on the Gold Coast entertainment industry around 2001, but went on to successfully win many more roles in advertising campaigns for clients like Sanctuary Cove, Red Rooster, Arnott?s, Telstra, Mazda and Zyrtec. She?s also recently appeared in Australian television productions Mermaids, Mortified and The Sleepover Club as well as Director Evan Clary?s 2003 film Under the Radar.

Simone is excited about her role in Chris Nyst?s just released Crooked Business which was recently selected and screened at The New York Film Festival and The New Hampshire Film Festival. Viewers are probably most familiar with Simone thanks to her work on channel 7?s Queensland?s Best Living series after she won the role following a national search for a new host. “It was a dream come true to be chosen for this job because it meets both my love of home design and travel, which has obviously been a big part of my life up until this point,” says Simone She scored the role of presenter for this 8-year old series in 2006 and has enjoyed ratings success for the past four years. Simone believes she effectively combines the in-demand skills of an actor/presenter/performer to portray a likeable and intelligent persona on screen.

“You?ve got to be able to give the industry and client what they?re looking for. They want a personality – not a one dimensional performer or artist, but someone who can talk and think for herself and present an opinion”. Simone will be back on our screens in 2010 featuring once again in the highly successful Suncorp Bank ?Bright Banking? campaign and several exciting television projects that are yet to be announced. In her ?spare? time, Simone volunteers for Meals on Wheels, distributing food to the elderly and less fortunate, and supports Act for Kids (formerly Abused Childs Trust), of which she is Gold Coast Ambassador.

Simone is available to MC or present at your special events and corporate functions. She?s also an experienced stage, film and television performer, recognised for her classy persona and confidence.